So I sat down fully intending to work on the thesis rewrite. Then I got distracted when I realised there was no link from anywhere save a few old blog postings to the page with the rewrite! There's also nothing from the homepage that takes you directly to the Python 3D Software collection, which is now the most-visited page on the site.

Obviously I needed to create an icon for these two features, starting with the design theory pages. So what to use? The original icon for the thesis is now my overall site icon (the architeture student poking at the mud in which he is stuck with a T-square while holding his drawings over his head to keep off the rain), so I don't want to reuse that. Instead, I'm thinking of a hand extended to give something intangible to the world... something like this: 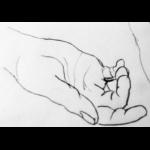 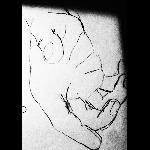 (I need to get a scanner hooked up and working, as photographs of drawings are not spectacularly professional looking). It's the second sketch that is the real target. The foreshortening makes it a much stronger looking image than the rather diagramatic first sketch.

Anyway, I got to the point of having a rough sketch of what I wanted and then started into work on producing an icon. Since I'm now on Linux, I don't have CorelDraw or Photoshop available. This particular icon isn't a huge concern wrt CorelDraw, as its an organic drawing. Now, on Windows I would have still used the tablet + Corel to create the final icon image via tracing and cleanup of the rough image (that's how I create, for instance the PyOpenGL and OpenGLContext wrigglers), but I don't really trust Inkscape enough to do that much work in it (it has this annoying habit of crashing, and the interface is pretty non-intuitive IMO). No big deal though, I can do a pure bitmap job for it; even though I haven't used The GNU IMP much, I figured I'd give it a try, since the reviews I've read have been very good.

However, when I went to draw the first stroke... I realised I've never set up the program to use the pressure-sensitive tablet... and I still haven't. The problem seeming to be that I haven't got xinput compiled into my gtk+ library (at least seems that way from the FAQ). Haven't found a USE flag in Gentoo that turns it on. Sigh.

Anyway, burned my evening's free time away on this, so I suppose I will have to get back to it some other day. Not a shining happy feeling of accomplishment when it comes right down to it :( . Still, I did actually sit at the drawing desk for the first time in months... that in itself is a good thing :) .