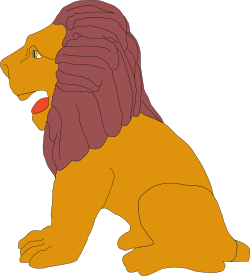 Felt like producing something pretty, but not quite awake enough to do anything complex, so created a piece of clip-art for the Open Clip-art project. Inkscape really doesn't like zooming in too far to an image, it becomes basically unusable and I wind up having to zoom out again. It also really needs a "cut" tool for paths, that is a tool that in one motion allows you to insert a new node on the path, open the path at that point, and break apart the resulting two paths into different objects.

Other than that it worked quite well. The UI was a little cumbersome here and there, but I think that's mostly that I don't have the keyboard shortcuts memorised, Corel is a little cumbersome too if you don't know how to zoom, pan, switch tools and the like without needing to use the button bar.

[Update] And on waking up this morning, I realised that I don't have copyright in the image in the first place. The statue on which it's based isn't an ancient work as I'd thought, it's just a really weathered (poor concrete) modern work. Never decide to do things at 4 in the morning.