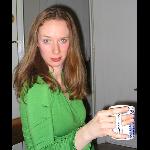 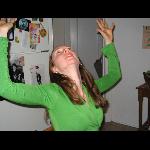 Went to Lara and Melissa's party this evening. Was a mostly musical crowd, but very little real jamming occured. Did make me wish I'd learned an instrument back in school instead of just focussing on vocals... vocal improv takes a little bit more patience from the audience... and whistling doesn't quite cut it. 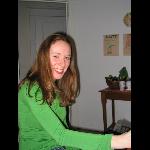 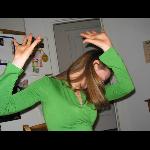 Afraid that the only pictures which turned out were those where I was using a flash (I dislike using it because it disturbs people). It was just way too dark without it, the exposure was so long that everything turned out blurry. Have to get someone who's willing to interact with the camera to do so in daylight some day.

Annoying part is that lots of the pictures had managed to capture interesting expressions and body language, they were just blurred too much to be presentable. Even among those that weren't horrible, the quality wasn't spectacular, that first picture, for instance, is somewhat grainy and out of focus, with too much exposure. Should have been using natural light. Sigh. 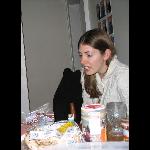 I believe this lady's name was Tia. Her (boy)friend is an architect, but he seemed kinda out of it, I gather due to being in recovery from a flu bug. She's a flautist; also plays guitar (there were 4 guitars, a violin, a kazoo, a bamboo flute, percussion sticks (sorry, forgot the name), and a drum machine).

Melissa's mom and her friend Ron were also there. Didn't really spend much time talking with them, though. Also a couple of her friends who were fairly active NDP people at some point. Ron actually accused me of being a post-modernist! Ick! 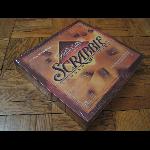 And finally, here's the big news of the night. Shane sold me this Deluxe Edition Scrabble for a mere $20. Natasha mentioned yesterday that she wanted to learn how to play, and Shane and Lara both mentioned that Lisa is a bit of a scrabble demon, so I have a good chance of getting two (maybe three, if Lara was serious about being interested) ladies to show up at my door for about what I spend on two visits to Starbucks.