I'll take issue here with one of Smith's tools in Dynamics of Delight. Not so much because it's a major problem, but because it allows me to explore what I believe is an underlying principle that he is glossing over in attempting to present a simpler model for perception. Since our goal is to use perception as a tool for the practicing designer, we want to have the designer understand the model in as much detail as possible, to allow them to better predict and manipulate those perceptions.

Smith uses a model I'll call the "Fibonacci figure/ground" model. Basically this takes the Gestalt idea that the perceptual system is constantly trying to find distinctions between things by "forcing" differences and similarities such that a perceptual field can be read as a "figure" against a "ground". To this model is added a metaphoric interpretation of perceived harmony, in particular, a description of the balance between figure and ground something akin to "A is greater than B, but not so much greater than B as to completely overwhelm it." You will recall that this is very close to explanations of why the golden ratio is perceived to be beautiful (it is longer than a square, but not so long as to be approach two squares). 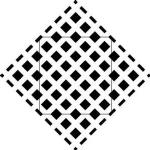 We know that the perceptual system is trying to create distinctions between elements in the perceptual field. We also know that the processes of heightening and leveling (forcing) are constantly being applied to our perceptions and ideas. What becomes a problem is Smith's over-use of this type of analysis. Reducing every environment to a binary contrast between figure and ground ignores any other perceived order. While it is generally possible to perform the reduction (you can always drop information until a decision is black/white), it doesn't necessarily explain the effect of the environment on the user.

We are capable of perceiving orders, progressions, growth, motion, and any number of other "stories" in an environment. Though it's arguable that all of those can be read as combinations of binary figures, the perceptions of those orders are themselves percepts to be processed by the perceptual system at higher levels of abstraction. Again, this has been explored by the Gestalt (and others), in effect, our expectations and ideas are just as likely to control what we perceive as actual input from the world.

Smith has some discussion of meta-perception in his "fourth dimension" (i.e. a temporal story of revelation as one explores an environment), but still sees it as a binary reduction to A versus B across time. We, however, are quite adept at detecting and ordering the stories in our environment. We don't think of them as static pairs of figure and ground, we think of them as progressions, or growth, or motion. We see patterns that match complex known patterns and connect them to current percepts (it's a forcing to a pattern, just as at the lower level).

I think the problem may be that Smith is focussing solely on the attempt to bring "delight" (beauty), and so isn't looking necessarily at the more involved questions of underlying orders. Although he briefly discusses metaphor, it's more as a generator of form, rather than as a part of the perceptual fields (though he does mention association). The question is never raised of when not to create a readily resolved figure/ground balance. Smith's underlying assumption that the goal is always to create harmony and beauty means that the possibilities of a more complex and subtle orders are never explored.

In particular, the attraction to "harmonic balance" doesn't seem to hold true at the conceptual level. Is it just that as we get more abstract we become less inclined to appreciate balance and more inclined to like simple, bold patterns? In other words, why would we like easily-read environments (where the second-level percepts are simple and uniform), why wouldn't we want a subtle balance of readings? Is the preference for simple readings just a "limbic" attraction? Is Smith's "aesthetic beauty" merely a limbic reading of first-level percepts? I would argue so.

Anyway, it's been far too long a day, I guess I'll leave this to Friday.