I converted Jelle's project to run in OpenGLContext, but when I did so, the rendering went all to heck, seemingly randomly losing triangular faces. Turns out it wasn't random, it was an artefact of the GLU tessellator wherein it was generating polygons which were in reverse order vertex-wise to those passed in as "solid". 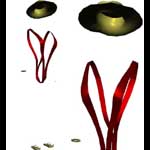 Oh, sure, there's a few people who were looking for Python or virtual reality information. Apparently a lot of (likely disappointed) Curious George fans too, but really it's Willendorf and Claire who draw almost all of the search-engine-originating traffic (44 hits for those two).

Only things that people seem more concerned about is clutter. Strange ...

Was up at some ungodly hour this morning (though I steadfastly refused to answer the phone for whatever nut-case phoned me at 9 in the morning), so I think I'll use up an hour of this week's overtime (I have 7 hours extra just this week, which isn't a huge amount, but when you're not ...