Finished off the Padovan book "Proportion" today. Last hundred pages or so went rather faster than the rest of the book. Rough notes follow:

Such a scam
He mutters
Walking into Starbucks

I'd really rather not, but a patch-set for a multiple-years-old "experimental" release that's only linked from ...

Well, today was (almost) the end of the first work-week under the new schedule. I spent the bulk of the day on cleanup and fixes, this is mostly because I'm expecting the next big task to take a few weeks, and I don't want to be backtracking to fix things in the meantime. 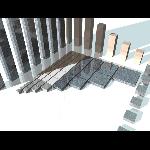 Doing a bit more reading after work. Basically moving through the Renaissance up to the Baroque. I'm going to have to go back and do some analysis of the various proportional schemes. Wish I had a decent 3D modeller (i.e. one that worked like 3DSMax or AutoCAD), I'd like to produce something similar to the ...

Spent the day on Cinemon cleanup and tightening. Nothing dramatic, just little ducts and wires poking through the finish that needed to be poked back in behind the plaster.

I finished the TAL-to-Nevow conversion for the modems page, then made a Content adapter that allows the Content page-fragments to be rendered directly as though they ...

I'm trying out a new work schedule this week. Basically I'm working an extra 2 (billable) hours/day and taking both Friday and Saturday to work on the thesis. There's not much else to say about the day, most of it was project management, testing, and minor tweaks/fixes. The last 3.5 hours was taking in an ...

I fixed the longstanding bug in PyOpenGL where it fails when used with py2exe because of Tarn's "version" file. PyOpenGL's C configuration code uses that file and I've always broken something or other when I change it, so I now just read it and create a version.py file that is imported at runtime.