Somehow a test case which consists of creating a client, calling getTable( ) on it, and having it immediately raise a socket error when it goes to send is leaking. There must be something going wonky at the Twisted level. Maybe a deferred/callLater object getting left on the stack for every call? Maybe a demon? ...

Frustrating (I'm gnashing my teeth at this point) to spend literally hours trying to whittle down a memory leak only to get close and find that it disappears. Mirages of memory leaks plague me. Now that I'm doing a gc run after each test case, and with a few other tweaks to try and filter ...

Okay, so I have the bug isolated... sort-of. I have two test cases which differ solely by 1 call. In the one case, there's a memory leak (beyond the garbage created by the bisect oid store). In the other, there's none.

The problem is, I can't see any way for the leak to fall out ...

The most obvious leak in the test suite turns out to be limited to the bisect-based OID storage module. Nothing to do with the real-world system :( . Haven't been able to figure out how the garbage gets produced, the tuples are just part of a big list stored inside the Agent object. The Agent ...

Tracking down the memory leak is not going well. So far each time I think I've isolated a test case that produces a leak it eventually stabilises at some memory level after an hour or two of operation.

There's something funky going on that I'm thinking may be a reference loop that's requiring the cyclic ...

The tension between left and right can be thought of as a pull between collective idealism and individualism.

However, the philosophers of the right, in explaining how a society without left-wing thinkers would work (i.e. without anyone willing to do anything they don't want to do) tend to eventually come up with the idea of ...

A few new poems on the texts page. Nothing really interesting, just can't-get-to-sleep ramblings that could use some editing.

A few coffees ago with Lara and Shane, we were discussing the age-old design versus evolution "problem". In my daily reading, I've just stumbled upon this article.

In the article they are just noting that stress is accellerating the reduction of the "protective" tails of the DNA strands (telomeres). Telomeres appear to act (speculation) ... 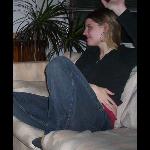 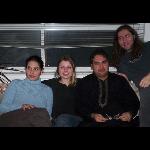 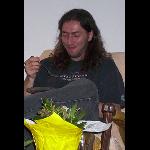